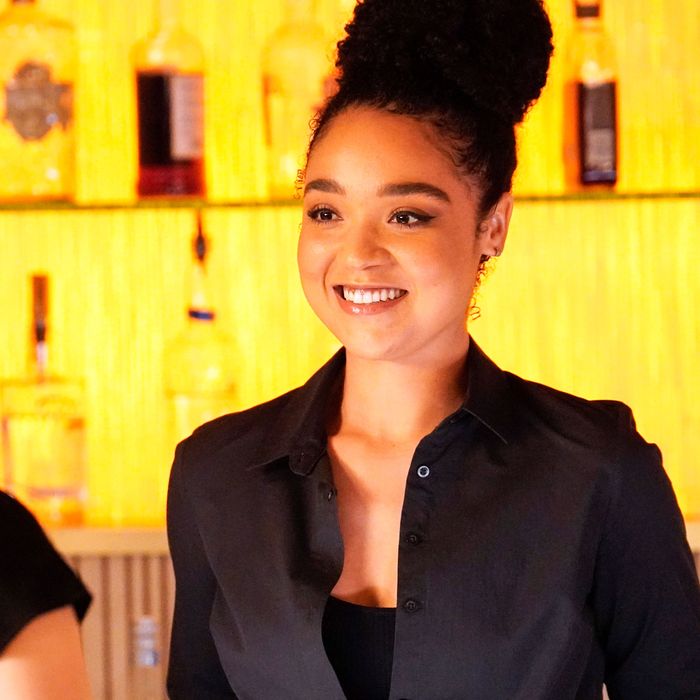 This season of The Bold Type has been, let’s say, a little out of character for Kat Edison. Kat, the Black, queer social media editor extraordinare known for speaking her mind to a fault, found herself out of a job at Scarlet at the mid-season finale after she released the board president’s tax returns and exposed his pro-conversion therapy politics. Enter a bartending gig at a member’s only women’s club Wing facsimile where she subsequently falls for said president’s hyper-conservative, hardline immigration-loving daughter, Eva.

The day before Thursday’s season finale was set to air, a representative for Freeform announced that the company had taken down the media screener of the finale and would be replacing it with an edited version. (Screeners are advanced releases of episodes given to journalists for review. It’s not uncommon for them to be incomplete or awaiting finishing touches, though usually those changes occur well before 24 hours to showtime.) A slightly different version aired on Thursday evening. (Warning: spoilers ahead.) In the new cut, Kat and Eva have sex after Kat’s podcast launch party. Kat sneaks out early the next morning and Eva texts her to follow up. Kat tells her the relationship is “too complicated” and has to end. In the original version, Kat didn’t end things, sending a different text that left the door open for more Kat and Eva down the line. In the new version, it’s possible that the show could continue without ever mentioning Eva again.

In anticipation of the season finale, Aisha Dee, the actor who plays Kat, posted a multi-page note on Instagram detailing the many ways the show has failed her, her character, queer people, as well as Black and non-white people. For a show that was pushing stories about a Black bisexual woman (Kat) dating a Muslim lesbian (Nikohl Boosheri as Adena El-Amin), things behind the scenes were markedly less diverse. It took two seasons, Dee wrote, before the show got one BIPOC writer. “Even then, the responsibility to speak for the entire Black experience cannot and should not fall on one person,” Dee wrote. She noted there were no queer Black or Muslim writers on staff telling Kat and Adena’s story, and added that it took three seasons before the show got a hairstylist who knew how to work with textured hair.

Dee also got into the relationship between Kat and Eva. “The decision to have Kat enter into a relationship with a privileged conservative woman felt confusing and out of character,” she wrote. “Despite my personal feelings about the choice, I tried my best to tell the story with honesty, even though the Kat I know and love would never make these choices. It was heartbreaking to watch Kat’s story turn into a redemption story for someone else, someone who is complicit in the oppression of so many. Someone whose politics are actively harmful to her communities.”

Dee’s stance is one that echoes what some have been saying all season. “I refuse to believe that the same woman, who just a few episodes ago was comforting Adena when she opened up about her experience with conversion therapy, is going to begin a relationship with the daughter of the man who repeatedly shut down Adena’s artwork and supports conversion therapy himself,” Ariana Fierra wrote for Remediality earlier this month. “While Ava may not agree with it personally, she defends her father who does. It’s insulting to Kat and to all the fans watching.”

Freeform has since released its own statement in support of Dee’s, saying “our goal on The Bold Type is and has always been to tell entertaining, authentic stories that are representative of the world that Kat, Jane, and Sutton live in — we can only do that if we listen.” Season five (maybe?) here we come.

Sturgis was a ‘warning sign’: Next mass motorcycle rally will be smaller, with masks required – Washington Post

The Agents Of S.H.I.E.L.D. showrunners reveal the plan behind that grand series finale – The A.V. Club

“Mercedes Are out of Our Reach”- Charles Leclerc Reveals Low Expectations...